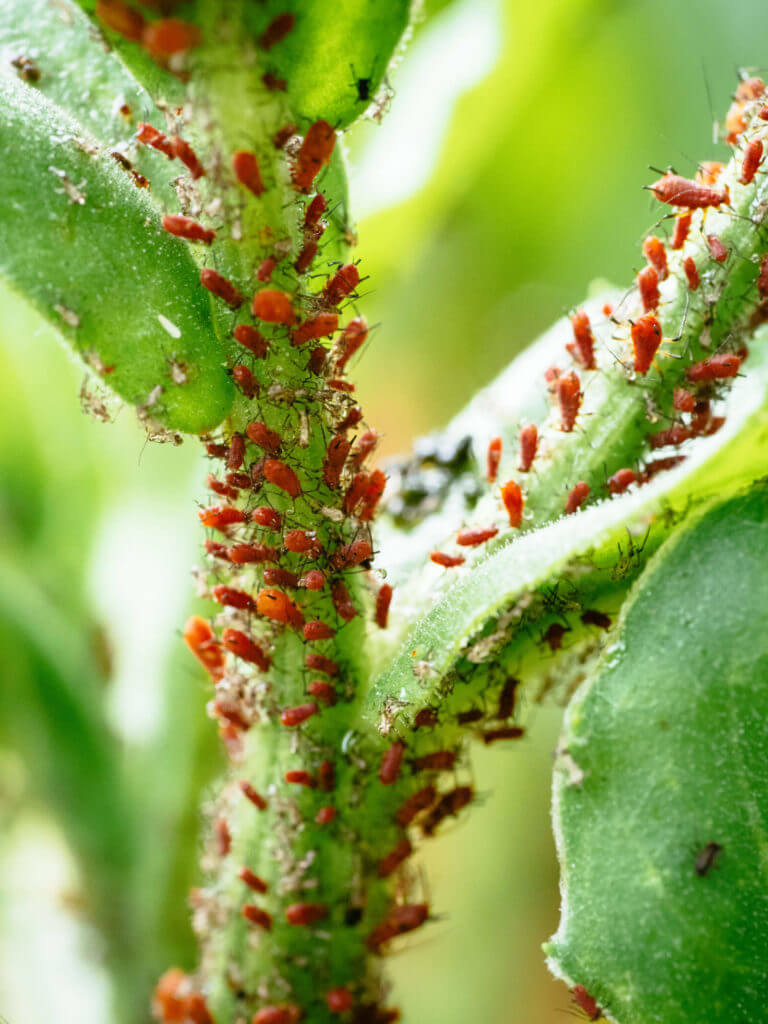 Of all the pests that plague gardens throughout the season, aphids are among the most destructive, overwhelming, and frustrating. They seem to multiply overnight and can quickly invade a garden, leaving you with sticky, stunted plants that struggle to survive.

Not ones to be particularly picky, aphids are voracious feeders and descend on both indoor and outdoor plants, including ornamentals and edibles.

Though we tend to view them in a negative light, we should really be thinking of aphids as nature’s indicator that something is out of balance in the garden. Aphids usually show up on plants that are under some sort of stress — perhaps drought, or overwatering, or over-fertilizing.

Luckily, aphids are one of the easier pests to manage if you catch them early, before their colonies grow too large.

And just how large? you may be wondering. Well, under optimal environmental conditions without any predators, parasites, or diseases, a female aphid hatched in spring can theoretically produce up to 600 billion descendants, or up to 41 generations of females in a single season!

What Is an Aphid?

Ranging from 1/16 to 1/4 inch long, aphids have waxy, pear-shaped bodies that vary widely in color, depending on the species (to date, about 5,000 species have been discovered).

Green aphids are often the most damaging because they blend in so well with leaves and stems that they tend to go unnoticed until their numbers grow out of control. Also common are yellow, gray, red, brown, and black aphids, and the rather wild-haired, fluffy white woolly aphids that resemble mealybugs.

Some aphids even have wings, which makes it easy to mistake them for other pests. This happens later in the season when the aphid population on a plant becomes too massive to sustain the colony.

In response to the overcrowding, hormones trigger the development of wings in female aphids to help them fly to other food sources and, unfortunately for us, establish new colonies. They do so quickly and efficiently by being viviparous — that is, giving live birth.

Though they may be small and seemingly insignificant compared to other insects, they thrive by the sheer force of their numbers. If there’s one thing aphids are really good at, it’s reproducing, which is how they’re able to overrun a garden in a blink.

A typical life cycle starts in spring with wingless female adults giving birth to female nymphs without the need for male mates.

Because they’re not sitting around waiting to hatch, the females mature rapidly and go on to produce the next generation of females. That generation soon produces more females, and on and on — all without a single male involved. (With very few exceptions, the aphids in spring and summer are all females.) Each generation lives for 20 to 40 days.

For most of their life, aphids remain on a host plant until the infested plant curls up and dies. Contrary to popular belief, they don’t actually “eat” or chew on the plant; rather, they suck sugar-rich plant juices through their straw-like mouthparts, draining the plant of nutrients.

They find suitable mates and — as an example of one of the many wonders of nature — these females (whom you now know are capable of being parthenogenetic) will actually lay eggs on perennial host plants. Yes, they can reproduce both ways!

These eggs overwinter and eventually hatch into the next batch of wingless matriarchs, who continue the family line in spring.

How to Get Rid of Aphids Naturally

The hardest part of controlling aphids is making sure you catch an invasion early, before the colony has multiplied and become unmanageable.

Aphids like to shelter on the undersides of leaves and hide deep in the centers of plants like lettuce and broccoli, so get in the habit of inspecting your plants regularly, especially during periods of new growth.

Speaking of new growth, aphids are drawn to tasty, tender young shoots, so one of the keys to keeping their numbers in check is to avoid over-fertilizing your plants. Excess nitrogen causes a flush of new growth that helps sustain new generations of aphids.

Instead of applying fertilizer all at once, feed your plants smaller amounts of nutrients throughout the season, or use an organic slow-release fertilizer only when needed.

Plants are prone to stress during periods of drought, so high summer is an especially susceptible time for aphid infestations. Plants are more defenseless during hot, dry conditions, as they’re not able to produce the chemicals they need to fend off pests.

Drought can also increase the quality of the plant sap and make it more attractive to aphids. This happens because sugars and nitrogen become more concentrated in drought-stricken plants, allowing aphids to obtain more usable food in a shorter amount of time.

In order to control aphids in your garden, try to avoid underwatering (or for that matter, overwatering) so plants stay healthy and strong.

3. Attract beneficial insects to your garden.

Aphids have natural predators that include parasitic wasps, ladybugs, lacewings, damsel bugs, big-eyed bugs, and hoverflies, whose adults and/or larvae consume all or parts of aphids. Just the mere presence of parasitic wasps has been found to alarm aphids so much that they drop off the plant to the ground, where they eventually die.

I often leave a small colony of aphids on select plants for the sole purpose of feeding and keeping beneficial insects around. You can attract more of these good bugs to your garden by growing a wide variety of their favorite nectar-rich flowers.

Beneficial flowers include umbels (like dill and Queen Anne’s lace), flat, single-headed blooms (like cosmos and black-eyed susans), and clusters of florets (like lantana and basil blossoms). You can find a list of easy-grow, pollinator-friendly plants here.

A popular method of pest control among greenhouse growers is using “banker plants” to introduce parasitic wasps as a biological means of pest management.

The wasps arrive by way of wheat and oat plants, which have been infested with cereal grain aphids. Since these species of aphids only colonize grains, they’re harmless to fruit and vegetable plants.

Many of the aphids have already been parasitized by wasps. When the newly hatched wasps emerge from their host “mummy” aphids, they begin to parasitize other aphids. The wasps are so good at their job that a small population can keep aphids in check for an entire season, all without the use of pesticides or other biological controls.

4. Use a strong spray of water to dislodge aphids from plants.

Of all the natural remedies that help get rid of aphids quickly and effectively (not to mention inexpensively), a simple, strong blast of water is one of the best and easiest ways to control these pests.

After all, everyone’s got a garden hose; just aim it directly at the affected leaves and stems to spray the aphids off. With their weak legs, most of the aphids will be unable to crawl back up the plants to feed.

The water will also rinse some of the “honeydew” off and prevent an ant infestation at the same time. (Read more about aphid honeydew below.)

Repeat every few days as needed until the population is visibly reduced. In cases of very young, fragile plants, or extreme infestation where it isn’t feasible to continually drench your plants, consider the next steps in organic aphid control.

Because of their soft bodies, aphids are easier to kill than many other pests. They’re especially susceptible to natural chemical controls like soaps and oils that disrupt the structure of their membranes and suffocate them.

Insecticidal soap is very effective against aphids and overwintering aphid eggs when sprayed directly on them. Make sure you only use the solution where you see aphid colonies — typically on the undersides of leaves — and not resort to spraying the entire plant.

The way insecticidal soap works is upon contact, and while it’s wet. Unlike other pesticides, it is not systemic (absorbed into plant tissue), so it stays on the surface and loses effectiveness once dry.

You can easily make your own insecticidal soap at home with this recipe (only two ingredients needed) and extend its usefulness by adding peppermint or eucalyptus essential oils, whose strong aromas may help repel new aphids.

Other potent treatments include neem oil and horticultural oil, which also must be sprayed directly on the pests.

The rock is easily crumbled into a fine white powder that’s harmless to humans (so long as one takes ordinary precautions against excess inhalation) but deadly to pests like aphids.

While we can’t see them with the naked eye, the diatoms have razor-sharp edges that can cut through the waxy outer layer of an insect’s body upon contact. This allows moisture to escape from the insect’s body, fatally dehydrating it.

You can kill aphids by lightly coating them with diatomaceous earth. (I like this simple tool for applying DE safely and efficiently.)

Make sure it’s food-grade DE and not pool-grade/filter-grade DE, which is used for filtration in swimming pools and fish tanks. The latter is not safe to use around humans and animals because of its high concentration of crystalline silica.

Inspect all the surfaces, nooks, and crannies of your plants (as well as the soil) for adults, nymphs, and eggs, and sprinkle or spray them with a fine layer of DE once every few days to kill them.

Because the dust is easily washed away by moisture, DE should be reapplied after periods of rain, high humidity, or overhead irrigation.

7. To control aphids, you should also control ants.

Aphids and ants have a mutualistic relationship; by eliminating one, you’ll likely eliminate the other.

As aphids feed on plant sap, they excrete a sticky, sugar-rich liquid waste called honeydew. These plant sugars are a byproduct of digestion (think of it as aphid poop) and ants go wild for it.

In fact, some ants will even express (or “milk”) the honeydew right out of the aphids come feeding time!

To keep the honeydew coming, ants act as guardians of sorts, protecting the aphids from predatory insects. Certain ant species will even go so far as moving aphid eggs into the storage chambers of their nests to help them survive winter.

The complex relationship between ants and aphids isn’t all warm and fuzzy, however. Science has shown that some ants have been known to bite the wings off aphids to keep them from flying away (and depriving the ants of their food source).

It’s also been found that chemicals on ants’ feet have a sort of tranquilizing effect on aphids, subduing them and making them less likely to leave the host plant.

Many of the same organic pest control remedies used to kill aphids (such as insecticidal soap, neem oil, and diatomaceous earth) are also effective against ants, so you can tackle them both at once. Keep an eye on a sudden emergence of ant colonies around your plants, as their presence may indicate aphids hidden in the foliage.

By getting rid of ants in your garden or house, you’ll allow beneficial insects like ladybugs to do their job.